Mysteries of the 145-million-year-old meteorite in Morokweng crater

It is considered a relic as there is no meteorite fragments ever recovered that is more than a few thousand years old. 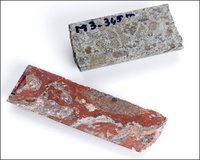 Roughly 10 or so kilometer in diameter, once impact it generates a “supernova” type of heat that reaches 13,000 Degree Celsius or more, equivalent to 66,000 times of the atomic bomb dropped on Hiroshima. (Link)

At the center of the explosion, everything become one, melted and fused together, so it is typically impossible for anything to remain its original state.

This changes all theories that the scientist derived from studying the past meteorites fragment. (Link)

View point:
I am neither Scientist nor Creatism freek.

I remembered reading a Science article that said to have traced Human DNA origin back to an Africa woman, and now there are debates on where is the Garden of Eden on the web.

My point, could the meteorite contain substances that alter the DNA of living mammals reside at the Cretaceous period, and hence forth creating the chance that certain numbers of early primate in Africa can evolve to modern men?

If my guess correct, which is not likely, than God is a visionary Scientist, I tell ya.

Super color scheme, I like it! Keep up the good work. Thanks for sharing this wonderful site with us.
»

Nice! Where you get this guestbook? I want the same script.. Awesome content. thankyou.
»

I love your website. It has a lot of great pictures and is very informative.
»