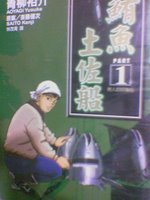 There are many Manga out there describing different profession, but it is just hard to find one describing the life of a true seaman. (Singapore Navy not counted)

Author of the Manga, 青柳裕介 chooses a rare topic as such for his Manga, doesn't make this Manga more boring, in fact, due to its rarity, I would call it a gem of Manga.

The Manga doesn't write about the hardship of the Tuna catchers only, but their passion and conviction towards the goals to secure more edible fish, each tuna once surface, must be treated with care or risk losing the market value, e.g. the tuna body should be intact for maximum sushi value.

If the story could be imitated and make into a TV series, I am sure it would be interesting, off course, not by TCS, they make lousy show.