The idea of cloaking proposed

The idea was still at its embryo state, although it is claim to be able to render dust and particles invisible. 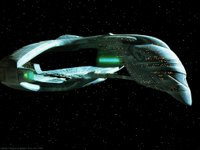 The theory works more a less like the tuning forks, but instead of resonating sounds wave, they proposed the theory of resonating light wave, object that stays near the device would have light bounce off, thus render invisibility.

The idea was propose by a number of physicist at the Imperial College London, UK. (Link)

Just like the previous invisible tech that I came across, it could end up 胎死腹中, or a hoax entirely.