Today is the 17th Birthday of His Holiness the Panchen Lama's Birthday. 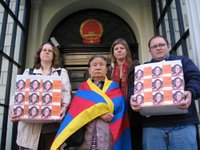 China, has a great way of expressing their respect to him.
After taking him into custody for the past decades, they now further their oppression of the group by posting ban on prayer flag in one of Tibetan area. (Link)

The great 'Dragon' Nation is going to host the Olympic in year 2008, I cannot help but wonder, what happen if one of all the contestant is a believer of Dalai Lama.

Off course, I do understand that some Religion like Christianity and Catholicism received fair treatment in China, perhaps they are the majority group there.

The Tibetan could only blame themselves for being the minority people there.

I also notice that Singapore usually follow the footstep, when they did, we do, just like the Falun group case.