This high tech robot carrier, surppose to act as a "mule" like transport for US arm forces. 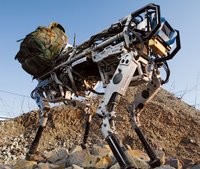 It has a speed of 3 miles an hour, can climb a slope of 45 degree incline, operate efficiently even in rough terrain, and, a more powerful version will be ready to go into real battle in 8 years time.

(Link) to the full report from Popular Science, and don't miss the amazing video of BigDog
in action.

Is this going to change the face of how we fight warin the future? Will we be fighting military battle with just merely robot? Maybe the age of Star War like battle is nearer than we thought.

Most important, is this going to be of benefit to Humanity? Or just like what happen after Nobel invented the exposive?
Posted by test at 09:31