What is Grass Mud Horse? “草泥马” is a Internet meme created by angry netizen, furious at current boring state of censored China Internet. The censored is aim at pornography. However, because of the ‘very intelligent’ filter, every thing that got flesh also kena blocked.

Here is the news(Link). NYT News here(Link). For whatever is worth, I hope there isn’t such horse.
Posted by test at 15:15 No comments:

Email ThisBlogThis!Share to TwitterShare to FacebookShare to Pinterest
Under Chinese, Culture, Internet

Instructable got this; I mean this is for us. The pillow to make your otherwise emotion 40 weeks less daunting. This can helps the husband, off course, and no, this will not help you to get pregnant easier. Think Science.

(Link)Quick, easy and free pregnancy pillow, Instructable.
Posted by test at 10:20 No comments:

Email ThisBlogThis!Share to TwitterShare to FacebookShare to Pinterest
Under Culture, Gadget 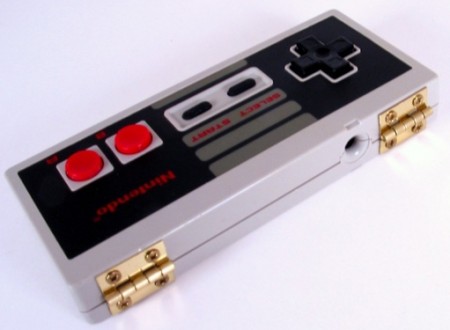 Here is a cool method to turn your favorite video game pad into a mini storage. Some ideas are cosmetic box, medicine box etc.

Email ThisBlogThis!Share to TwitterShare to FacebookShare to Pinterest
Under Gadget, Humanity

Scientists from National Institutes of Health did a study to understand where in the brain religious beliefs seem to be modulated. Their findings, whether culturally adapted or just plain coincidence, there is a region in our brain that response to belief’s stimulant. Snip,

“ Statements based on God's involvement — such as "God protects one's life" or "Life has no higher purpose" — provoked activity in brain regions associated with understanding intent. Statements of God's emotions — such as "God is forgiving" or "the afterlife will be punishing" — stimulated regions responsible for classifying emotions and relating observed actions to oneself. Knowledge-based statements, such as "a source of creation exists" or "religions provide moral guidance," activated linguistic processing centers.”

Does this means, for maybe, a thousand generations, if every single person in the family denied the existence of God, that brain cell will disappear? Just like the Appendix? No wonder human is losing hair.

(Link)Wired News, Religion: Biological Accident, Adaptation — or Both
Posted by test at 10:02 No comments:

Email ThisBlogThis!Share to TwitterShare to FacebookShare to Pinterest
Under Humanity, Religion, Science

Spiked of sale in Altas Shrug, sign of times?

Frankly said, I haven’t read the book. According to The Economist, Ayn Rand Altas Shrug has recently made a come back during this bad time. Snip,

“Whenever governments intervene in the market, in short, readers rush to buy Rand’s book. Why? The reason is explained by the name of a recently formed group on Facebook, the world’s biggest social-networking site: “Read the news today? It’s like ‘Atlas Shrugged’ is happening in real life”.

(Link)via Freakonomics, Atlas felt a sense of déjà vu
Posted by test at 23:59 No comments:

Email ThisBlogThis!Share to TwitterShare to FacebookShare to Pinterest
Under Humanity

Listen to the little boy, man!

The other one that do the same thing is superstitious.

Email ThisBlogThis!Share to TwitterShare to FacebookShare to Pinterest
Under Humanity, Religion

12 signs of Zodiac, made of world map

A very creative flash presentation of 12 animals in the Zodiac with flash. Just Intriguing!

(Link)十二支，12 Animals. Graflex Directions.
Posted by test at 11:10 No comments: