Fitna the Movie: Geert Wilders’ film about the Quran (English). 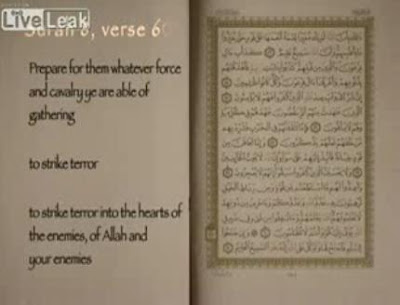 Fitna is a 16 minutes video that tells and attempt to explain the relationship between Quran and terrorism. It starts by Surah 8, Verse 60, “Prepare for them whatever force and cavalry ye are able of gathering, to strike terror, to strike terror into the hearts of the enemies, of Allah and your enemies…”

Follow by escalating scene on terrorism, their doctrine and events. This is not a footage I will recommend to the faint hearted. It is propaganda content at it’s extreme.

You be the judge. I regret that I cannot explain this movie properly.

Update: In response to the above 'Anti-Islam' theme, another movie was made in less than a day. Watch 'Schism (The Bible version of Fitna)'
Posted by test at 14:48

Email ThisBlogThis!Share to TwitterShare to FacebookShare to Pinterest
Under Culture, Humanity, Religion