Make a date with Darwin, speaks freely for a day 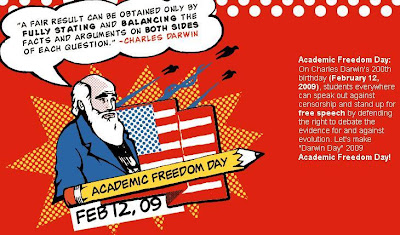 academicfreedomday.com urges you to make your day on 12th Feb 2009, they said,

“On Charles Darwin’s 200th birthday (February 12th, 2009), students everywhere can speak out against censorship and stand up for free speech by defending the right to debate the evidence for and against evolution. In 2009, let’s make "Darwin Day" Academic Freedom Day!”

(Link) Academic Freedom Day, speak out and practice your belief in public. Can we do it in Singapore? I really wonder how Atheist ‘practices’ their ‘belief’. Open sharing, not meant to offend. (Thanks! Mr Belfort, for pointing to this site)
Posted by test at 14:23

Email ThisBlogThis!Share to TwitterShare to FacebookShare to Pinterest
Under Humanity, Religion