The more you stay on Internet, the heartless you become? 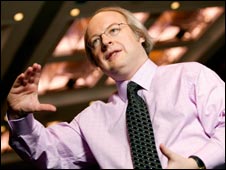 Usability “guru” Jakob Nielsen said in a BBC interview, the more you Google, the more likely you become ruthless. You want thing faster, straight to the point, not bother to listen to option, finally everyone that says more than 3 sentences to you, you give them a lead in the head. (Link)

No wonder lah! So many companies retrench people, gahmen and commercial groups hike charges without think twice, even a plate of fried noodle also every month rise 10 cent. I think they also Google.

I think we should ban Internet. No, ban Google. For the sake of Humanity, it makes us become less sensitive to each other.

Come to think about it, I remember once while chitchating nicely to a 'friend' online and he suddenly blunt out “Buzz the f@#k out of my way”.

Email ThisBlogThis!Share to TwitterShare to FacebookShare to Pinterest
Under Humanity, Internet