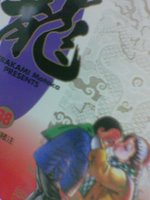 Is here, in this part the fight for the jade which could lead to atomic bomb intensify.

It is not known that which nation will get the jade, although we all know finally US invented the MDW, the story gets very interesting by involving many underground services which does not actually exist.

As good as a story teller like Murakami Motoka, you still cannot change history, nor even rewrite people opinion about history.

The series now stretch to nearly 40, which is more than I anticipated, by the look it can well reach 60 or more.

A lot of plot is involve, it has the best story in manga I have ever encounter, it is even better than Da Vinci code the book.

By the way, this manga is an award winner in Japan.
Posted by test at 10:30